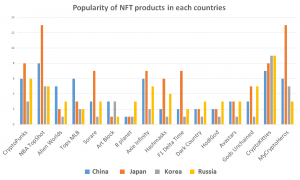 25th, June, Tokyo – FEB inc. conducted a survey on trends in the crypto space, including NFT, among crypto professionals such as crypto exchanges, consulting firms, media, SNS influencers and researchers in China, Japan, Korea and Russia.

NFTs Most Popular in China, Sluggish in Russia 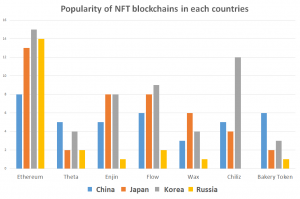 the next most popular countries, followed by Russia, where there are few active trends in either NFT products or NFT blockchain.

NFT is the second most active trend after DeFi

Regional differences in popularity of blockchain and products

When asked about the most popular NFT blockchains, Ethereum dominated with 84.2%, followed by Ethereum in China, Chiliz in Korea, Enjin and Flow in Japan, and Theta and Flow in Russia.

In terms of NFT marketplaces used, Opensea is by far the most popular, accounting for 61.8% of all responses.

NFT is a bubble, DeFi is not